What is empathy and can it be taught? 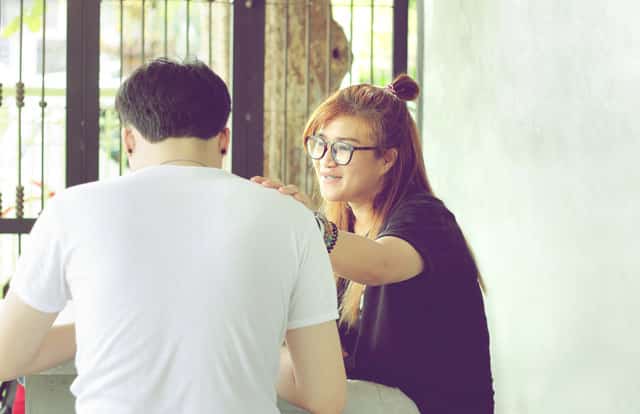 Behavioural scientist John Marshall Roberts claims that only empathy can save our species from itself. But what is empathy, and can it be taught?

Often confused with sympathy, empathy is the ability to put yourself in someone else’s shoes and recognise and respond to what that person is feeling. Unlike sympathy, empathy doesn’t require you to “step into” their world and actually feel what they are feeling. It also doesn’t require that you share the same values and beliefs. Instead, it asks that you try to understand from another’s perspective

The capacity for empathy seems to be innate, and is evident even in other species – the adult elephant that tried to rescue a baby rhino stuck in the mud despite being charged by its mother, as recounted by Jeffrey Moussaieff Masson and Susan McCarthy in When Elephants Weep.

Manifestations of empathy often show up early in life. Many scientists believe it emerges when we are first able to recognise ourselves in a mirror, around three to four years of age, as it is at this point that we learn that we’re an individual and that we aren’t all the same.

Science also shows that children enter the world with different capacities for empathy, a result of neural connections in the brain. Research indicates that empathic observers have neural activity and autonomic arousal – as measured by heart rate and skin conductance – mirroring that of a person experiencing pain or distress firsthand. Nearly everyone has had the experience of flinching when observing another person in pain, such as when someone’s hand is slammed in a car door. In fact, studies show that the same pain matrix gets activated in the observer’s brain as in the person experiencing the pain, but to a lesser degree. This brain mapping, the physical basis of empathy, is thought to be related to the evolution of prosocial behavior because it motivates us to help others in pain. Research also indicates that the capacity for empathy may be partly or wholly lacking in disorders such as autism and schizophrenia, in which the mind is focused inward.

But, if there is real physical evidence for empathy, does this mean the capacity is entirely inherited and cannot be learned?

Edith Stein, a famous German philosopher and phenomenologist, declared that, while empathy can be “facilitated”, it cannot be “forced to occur”. What makes empathy unique, according to Stein, is that it “happens to us”. When empathy occurs, we find ourselves “experiencing it”, rather than directly “causing it to happen”. This, she argues, is the characteristic that makes the act of empathy unteachable.

That said, there is plenty of evidence to suggest that the environment in which children are raised can make a big difference to whether empathy is fostered or suppressed. Experts agree that healthy self-esteem is essential to empathy. For children to be able to go beyond themselves and care about others, they must feel secure themselves and “have a secure attachment to another person,” says Carolyn Zahn-Waxler, a psychologist at the University of Wisconsin. Infants and young children whose own distress is ignored, scorned or, worse, punished may learn to repress their own feelings of empathy towards the suffering of others.

Why is empathy so important?

When people lack empathy they act only out of self-interest, without regard for the wellbeing or feelings of others. The absence of empathy fosters antisocial behaviour – at its worst, cold-blooded murder and genocide. In fact, you could say that empathy is an essential ingredient of a civilised society.

And, while the verdict is out on whether empathy can be learned, certainly neuroimaging research has informed the development of empathy training tools – particularly important in areas such as medicine. Research conducted by The Center for Compassion and Altruism Research and Education at Stanford School of Medicine in the US, suggests that empathetic healthcare providers can actually help to speed up patients’ recovery times. One empathy-training programme for doctors, called “Empathetics,” developed by Dr Helen Riess, Associate Professor of Psychiatry at Harvard Medical School, promotes attitudes and behaviours such as self-awareness, nonjudgmental positive regard for others, good listening skills, and self-confidence as important in the development of an empathic willingness.

So esteemed is empathy in the eyes of experts that, in September 2015, contemporary philosopher and empathy expert Roman Krznaric opened the Empathy Museum in the UK, the world’s first museum dedicated to helping visitors develop the skill of putting themselves in others’ shoes. Amongst the exhibitions are a human library, where instead of borrowing a book you borrow a person for conversation – maybe a Sikh teenager, an unhappy investment banker or a gay father. In other words, the kind of people you may not get to meet in everyday life.

In his Tedx speech, The Global Urgency of Everyday Empathy, American behavioural scientist and psychologist John Marshall Roberts, argues that “the era of empathy” is upon us. According to Roberts, with global population growth and new existential threats due to climate change, only empathy will keep us from destroying ourselves as a species. Roberts points out that empathy – a byproduct of human evolution itself – is, ironically, also a vital catalyst of human evolution. “Only empathy,” he says, “will help us overcome today’s immense global challenges and evolve as a species.”

Intrigued by the inner-workings of the human brain? SACAP provides a range of psychology courses that grant deeper insight into the human experience, such as the Bachelor of Applied Social Science, and the Bachelor of Psychology. These courses help pave the way for a career in psychology, while providing valuable knowledge and skills that will serve you well in any number of career paths. To find out more, enquire now.

How can an Addiction Counsellor Help?

The Enneagram: A tool for achieving greater self-knowledge and growth