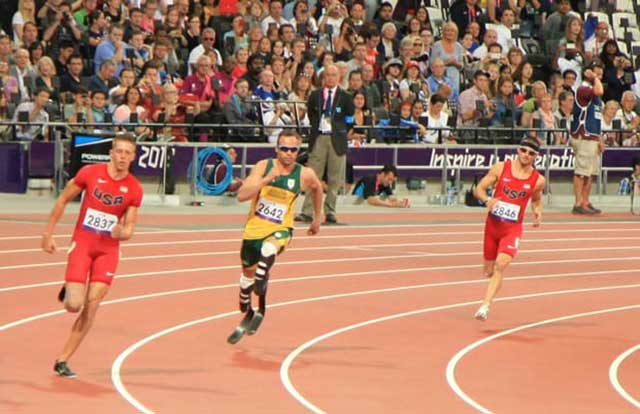 After Nelson Mandela, Oscar Pistorius was perhaps our most famous and admired countryman: a gleaming symbol of South Africa’s past resistance to adversity. For many of us, then, the demise of the ‘Oscar Dream’ has been crushing.

So, what happens to a nation’s psyche when what was once perceived as ideal, is revealed to be flawed?

Born in 1986 into a country in the midst of brutal repression (between July 1985 and June 1987 more than 25 000 people were detained under the state of emergency, and thousands more were dying in township battles between young black dissidents and the white army), Oscar’s arrival would plunge the Pistorius family into its own struggle – a genetic disorder in both his legs meant his parents confronted a stark choice: either prepare their child for a life in a wheelchair or face sanctioning a double amputation.

At 11 months of age, Oscar’s legs were removed just below the knees and, six months later, a tottering toddler took his first steps on a set of fibreglass pegs. But more heartache was around the corner for the young Oscar: his parents divorced when he was six and, far more devastatingly, his mother died when he was just 15.

The Psychology of Idealisation

Few would argue that, given his tough start in life, Oscar’s was not the consummate success story of guts trumping adversity. As the audacious young athlete strode to Olympic glory in London in 2012, the first paralympic runner to ever compete in the Games, it seemed he stood for the whole against-all-odds fairytale of the world’s definitiverainbow nation. And when, a year later, Oscar was charged with the murder of Reeva Steenkamp, it seemed to simultaneously sound the death knell on the South African dream in the nation’s cumulative consciousness.

The awe in which we’d held our beloved nascent democracy in the afterglow of 1994 has suddenly given way to disillusionment as South Africans encounter corruption, violence, economic uncertainty, and an unequal education system. ‘With the loss of the ideal, we are confronted with the real, and we grapple to make sense of its complexity,’ says SACAP’s Leanne Stillerman. ‘The confusing mix of hope and despair leaves us baffled.’

Stillerman, who is qualified in Clinical Psychology and conducts the Introduction to Psychology module that forms part of SACAP’s Bachelor of Psychology Degree, explains that idealisation is characterised as a defence against integrating that which is difficult about human experience. ‘We reach for something that is all good, transcendent and unspoiled, for fear that what is good in our lives cannot survive if flawed by disappointment, anger and pain,’ she explains.

According to much psychoanalytical thinking, the human tendency to idealise is a defense mechanism that derives from the child’s need to believe that his caretakers will protect him from all of life’s dangers. Children are frightened to confront the realities of hostility, illness, mortality, and other terrors for the first time, and idealisation of the caretakers protects them against overwhelming fear.

We carry residues of idealisation into adulthood. Frequently we idealise our significant others on whom we depend emotionally. In fact, studies show that idealisation is a normal and necessary aspect of mature love. The tendency over time to de-idealise those on whom we depend is also a normal component of development of individuation and mature love. In its mature form, it allows one to appreciate others for the reality of who they are; imperfect humans who are special to them in spite of their flaws.

The Dark Side of Idealisation: Devaluation

Seen as the flipside of the same coin, however, devaluation often follows in the wake of idealisation, says Stillerman, who explains that devaluation occurs ‘when that which was loved and idealised is stripped of value, hated and condemned’.

‘By definition, an ideal admits no impediments,’ she says. So, what happens when the ideal is revealed to be flawed? For his former fans, Oscar’s fall from grace has devastatingly shattered a dream. And some would say that the spectacular toppling of Pistorius from his pedestal could even be seen as a parable for the disillusionment of the South African dream.

‘The South African psyche seeks to ward off uncertainty and fear, searching for a sign of unitary truth, and an answer to the question: will our country crumble and sink under the weight of political, social, and economic challenges, or will it deliver on the promise of the rainbow nation?’ says Stillerman, explaining that, while these two opposing notions promise that certainty for which the psyche longs, they also offer polarities in the matrix of idealisation and devaluation rather than an apprehension of a complex reality. ‘How do we apprehend the reality of a country confronting high rates of unemployment, skills shortages, and structural inequality, while still acknowledging its many achievements, which offer hope for the future?’ she asks.

Is there an alternative to this polarity – an integrated way of apprehending reality that makes space for the good, the bad, and the ugly? Stillerman points out that, ‘while the ideal and the real are different, this distinction does not imply that there is no room for ideals, which help to constitute a vision of the society we hope to create.’

While, whether guilty or not, Oscar’s future will to some extend forever be blighted, perhaps it is possible to have hope for the future of post-Apartheid South Africa that is grounded in the real, rather than the fantastical, and in the knowledge that at least we are still prepared to engage with the difficult challenges we face.

Are you fascinated by the psychology of human nature, and determined to answer the perennial question: why do we do what we do? A career in psychology may be for you. SACAP offers a wide range of courses in psychology, including the Bachelor of Applied Social Science (BAppSocSi) and the Diploma in Counselling and Communication Skills. For more information, enquire now.