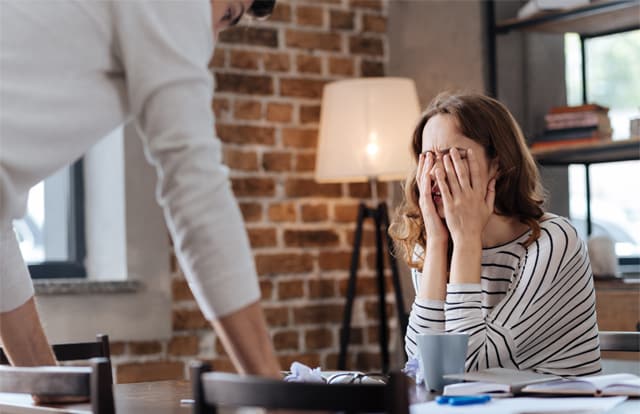 Can abusive relationships cause PTSD? Studies suggest that prolonged emotional abuse has similar effects on the mind to those suffered by victims of trauma.

Post-traumatic stress disorder (PTSD) is most commonly associated with those who’ve seen warfare. Indeed, the addition of the term to the Diagnostic and Statistical Manual of Mental Disorders (DSM) in the 1980s was greatly influenced by the experiences and conditions of US military veterans of the Vietnam War.

But this serious, potentially debilitating condition can occur in anyone who has experienced or witnessed trauma, be it as a result of war, natural disaster, serious accident, terrorist incident, the sudden death of a loved one, violent personal assault such as rape, or other life-threatening events. And, studies show, those who suffer sustained emotional and psychological abuse are also at serious risk.

The science of fear

It is natural to feel afraid during and after a traumatic situation. Fear triggers many split-second changes in the body to help defend against danger or to avoid it. This “fight-or-flight” response is a healthy reaction meant to protect a person from harm. Nearly everyone will experience a range of reactions after trauma, yet most people recover from initial symptoms naturally. Those who continue to experience problems may be diagnosed with PTSD.

PTSD symptoms are serious enough to disrupt one’s life and make it hard to continue with daily activities. Sufferers may find themselves reliving the event (also called “re-experiencing”), with memories of the trauma coming back at any time and bringing with them fear and horror of an intensity equal to those felt during the actual triggering event. They may also avoid people or situations that spark memories of the trauma, even shunning talking or thinking about the event altogether. The way the victim views him- or herself as well as others may also be affected – the world might now seem a dangerous place where no one can be trusted, for instance. Those with PTSD can be jittery, or always on the lookout for danger. They might become suddenly angry or irritable, a symptom that is known as “hyperarousal”. Finally, according to research conducted by Professor Jonathan Bisson and colleagues at Cardiff University School of Medicine, those with PTSD are at a significantly higher risk of suicide.

Emotional abuse: Is it traumatic?

While the link between physical trauma and PTSD is well documented, experts are only now beginning to see a connection between the condition and psychological trauma. People who live with and love someone who is emotionally abusive experience trauma on a daily basis, they say. The experience of constant put-downs, criticisms or whatever other forms the emotional abuse takes, not only wears down self-esteem but also impacts the nervous system in the same way a physical trauma would. What’s more, memories of the abuse can elicit negative feelings, intense physical sensations along with negative thoughts about oneself long after the abuse has occurred.

Psychologists call this type of PTSD complex post-traumatic stress disorder (C-PTSD) and describe it as a condition that results from chronic or long-term exposure to emotional trauma over which a victim has little or no control and from which there is little or no hope of escape. Essentially, the “complex” in complex post-traumatic stress disorder describes how one layer after another of trauma can interact with one another. Examples of such traumas include domestic and childhood emotional abuse. The difference between PTSD and C-PTSD is that the former can result from single events, or short-term exposure to extreme stress or trauma while the latter results from more chronic repetitive stress from which there is little chance of escape.

In the case of a high emotional-conflict domestic relationship, for instance, victims typically feel isolated and worthless as a result of their abuser’s repeated put-downs. They are frequently also financially dependent on their abusers or are threatened with dire consequences (such as losing custody of their children) should they even think of “getting out”. Finally, more often than not, they are depressed and thoroughly worn out from constantly being on guard for the next attack. It is not difficult to see why they should feel that there is little chance of escape.

Although there are any number of therapeutic approaches available, research by American psychologist Dr Christine Courtois, an expert in psychological trauma and author of It’s Not You, It’s What Happened to You: Complex Trauma and Treatment, suggests that three general stages are most effective in the treatment of C-PTSD:

Bipolar: What does it mean to be diagnosed with this disorder?

The Different Types of Intelligence: What Kind of Smarts are You?