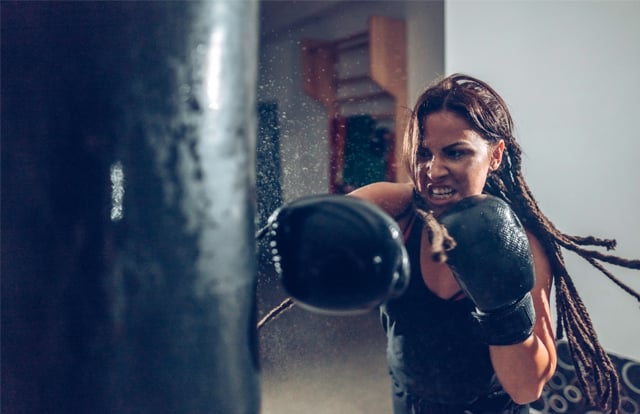 Anger. When managed, it’s useful tool. When out of control, it can wreak havoc. Here are five ways to help your keep your cool when it matters most.

You’re late for class. You didn’t sleep well last night. Your housemate finished the milk, so you missed your morning cuppa. You’re in the car, racing to college, some idiot is hogging the fast lane as if they are on a leisurely Sunday drive, and slowly the feeling starts to build. Your temperature rises. You hit the hooter, swerve into the slow lane and, as you overtake him, you give him the finger. Not your finest moment. Your anger took over, we’ve all been there.

Despite its at times rather unpleasant consequences anger is in fact a healthy emotion experienced by all of us daily. It ranges from a fleeting burst, like when someone carelessly bumps into you at the shops, to a full-blown rage fest, which often results in negative consequences and behaviour you later regret. When managed correctly anger can be a valuable indicator, letting us know when we’re in ‘danger’, be it emotional or physical. When out of control however anger can have devastating effects on our relationships, work and health. Research shows that angry people are three times more likely to have a heart attack compared to those less prone to such fury.

Often, anger is not the enemy however the problem lies in how you deal with it. Here are five ways to help you keep level-headed and reign in your anger demons

1. Get a good night’s sleep

It might sound cliched, but a good night’s sleep can assist with many an ailment, including anger. Being well rested assists us with managing our moods, especially when provoked. Being tired usually makes difficult experiences seem even worse than they really are and, as a result, we tend to overreact to situations often with negative results. Research shows that lack of sleep diminishes activity in the frontal lobe, the area of the brain associated with impulse control, thus making it harder to fight those angry impulses.

Our body has a very physical reaction to anger. Clinical Psychologist and Director of Clinical Health at Psychology Life Well, Dr Michele Barton, illustrates this when saying, “When angry, you’re releasing different hormones and neurotransmitters and many more than usual, so the body is overwhelmed with adrenaline and other chemicals that create the rush that people feel physically when they’re angry. These chemicals also affect your brain, so your brain acts differently than it usually does when those different chemicals and hormones aren’t present. This is why, when we get mad, our brain’s more rational prefrontal lobes shutdown, and its reflexive back areas take over.”

This surge in hormones, adrenaline and neurotransmitters can result in a sense of being out of control. As fight or flight kicks in we can find ourselves struggling to think clearly. Hence the need for a long, slow, deep breath. When you’re in the midst of an anger inducing situation and you feel your emotions start to rise. Stop. Breathe. Breathe from your diaphragm, not just your chest. Not only will this help to slow things down, giving you time to consider your reaction, but it will also let the body know that it isn’t in danger. That there is time to breathe and that flight / fight mode isn’t needed. This will assist with slowing down the surge of adrenalin, allowing your hormones and chemicals to return to base and for you to regain control of your body and your behaviour.

They say you can’t control the things that happen to you, but you can control how you react to them. The same rings true for anger. We have little control over what makes us see red, but we can control how we react when we see it. When faced with a situation that makes your temperature rise, try to stop and take a moment to consider alternative interpretations to the situation itself. Pause to examine the evidence, ask yourself if what is happening was meant in the way that you are interpreting it. Think back to the Sunday driver hogging the fast lane on your way to work. This situation can be interpreted in different ways:

–His behaviour is intentional – he sees that you’re in a hurry. It is 8am so he should assume that you’re on your way to work. He is purposefully creating conflict. He simply doesn’t care about your needs.

–His behaviour is unintentional – he hasn’t seen you sitting on his tail. In fact, he isn’t having a great morning either and, as a result, is lost in his own thoughts.
While both interpretations are frustrating, the belief that his behaviour is intentional is more than likely going to generate the most reactionary, anger-inducing response. Always try to consider other possible interpretations before reacting.

Taking a break sounds simple enough, but it can be hard to do when emotions are running high. If you’re having a hard time with your partner, boss, colleague or friend, do yourself a favour and take five minutes. You’re going to need this time to breathe, focus, interpret etc. Breaks are an excellent tool to use when anger becomes too much in a particular moment. They are not a long-term solution. Chances are you will return a little while later and the problem will still be there, but you’ll have clearer eyes and a cooler mind, which makes all the difference.

Hitting a punching bag = healthy release. Hitting the bottle = not so much. It is imperative to find a healthy release for your anger. All that adrenaline needs to go somewhere. It needs to be released and nothing will do the trick like a bit of cardiovascular exercise. If you must, picture your boss’s face every time you hit that ball, run as if you’re running into battle, do what you have to, just get it out. You will be amazed how much better you feel afterwards.

Finally, it’s important to remember that often the thing we hide from the most consumes us. From a young age we are taught that anger is not okay. That feeling anger is somehow wrong, something that is more indicative of being out of control rather than a healthy emotional range. This is not true. Anger is a healthy emotion. It is far healthier to feel anger when wronged or treated badly than feeling only fear or sadness. Anger reminds us that we have boundaries and that some things are not okay. It tells us when we need to say no. Claim your anger. Use it to educate yourself, a warning system telling you to pay closer attention to a given situation. It’s is healthy to own your anger, it’s when it owns you that problems arise.

Self-harm: What the condition is and what it is not

How to navigate the grieving process for a loss to suicide