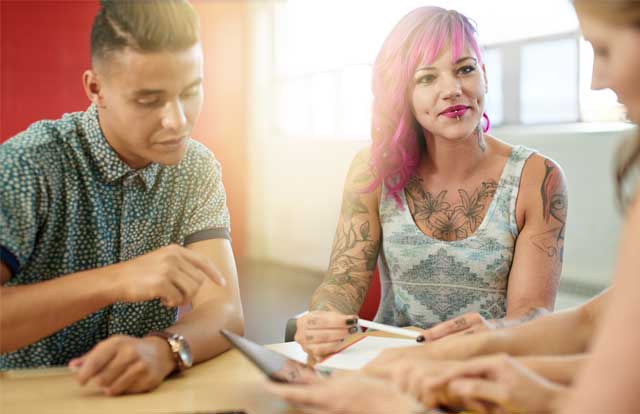 Mom in meltdown over your new tat? Dad so mad he won’t even say your name?

It’s fairly understandable why those on the far side of the tattoo debate may not be able to see the sense in paying money (sometimes a lot of it) and enduring hours of pain to create an indelible mark on one’s body. But here’s a defence that might give the old folk cause to pause: Your ink is actually a portrait of youth culture today.

Indeed, research shows that Millennials – the name commonly given to the demographic born post-1982 – are more obsessed with tattoos than any other group of mainstream consumers, ever.

Once reserved for indigenous tribes, soldiers, sailors, punks, and ex-convicts, permanent body art has skyrocketed in popularity. These days, everyone from Olympic champions to runway models sports a tattoo (or ten). The US Navy has even changed its body art policies, allowing for more and bigger tattoos, in the hopes of drawing in Millennial recruits.

While you may live to regret that giant skull-and-crossbones emblazoned across your back, there’s no denying that tattoos are the defining mark of the Millennial generation. Here are four (psychologically-grounded) reasons to prove they’re not just skin deep:

1. Tattoos enable this generation to clarify its identity

Young adults have always experienced a crisis of identity as they move from childhood to adolescence and then into adulthood. However, the widespread availability of professional tattoo parlours, coupled with the normalising of the once-subversive act of permanent body art, has enabled the current generation to externally proclaim its identity. While there’s no arguing that people of all ages get tattoos, Millennials lead the pack because, thanks to the stratospheric rise of the internet and social media, theirs, for the first time in history, is a generation of cosmic identification. So, while the skeptical old timers might shake their fists at the way the world’s gone, if the so-called obsession Millennials seem to have with tattoos means more young people who are better connected to their identities, that’s surely a good enough reason for the trend to continue.

2. Tattoos provide an anchor in a fast-moving world

A study conducted Jeff Murray, Professor of Marketing at the University of Arkansas, found that tattoos may be important because, at their core, they signify a means of cementing the permanence of identity. According to Professor Murray, “Tattoos do more than merely showcase facets of an individual’s identity; rather, they anchor, cement, and stand for the entirety of that identity. Even when everything else about the world, right down to the body, changes, tattoos are constants. They assure a link to the past.”

The need for that kind of anchor has been exacerbated by the overload of constant changes in the environment that Millennials, in particular, are challenged with. Since they are more wired-in that any other generation before them, their world is the one changing the most frequently. Day-in and day-out, they are bombarded with the newest social-media platform, the latest trends, and the newest films via phones, laptops, tablets, and various other screens day, all of which mould the demographic to adapt quickly to rapid change. But all those changes can take a toll on the mind, and, suggests Murray, it can be comforting to know that the design etched in your skin will remain with you forever.

Even the shadiest of tattoo parlours remind their customers that tattoos are permanent. Still, young adults continue to make this forever decision. In doing so, they (literally) illustrate the human predisposition for making lasting decisions with a very limited viewpoint. But, before mom and dad take up this line of argument, remind them that it’s by no means a new phenomenon. Generations before this one made permanent career choices while they were still in their teens, and your parents, who, having in all probability picked out a lifelong partner and made the (everlasting) decision to start a family in their early twenties, were probably elbow-deep in nappies at your age. So, yes, in decades from now the world will be treated to the spectacle of all those tattoos sagging on millions of bodies, but what’s a little ink in the grand scheme of things?

4. On the flip-side, tattoo removal opens the door for regret

According to a survey conducted by the British Association of Dermatologists, close to a third of the people who get tattoos regret at least one in their collection (interestingly, there’s a pronounced glut of people remorseful over tattoos they got when they were 18 to 25 years old: 45% of the survey’s respondents said the ink they wanted to get rid of most was art they acquired in the period of their life most characterised by youth and impulsivity). As a result, and somewhat ironically, the tattoo-removal business is one the fastest growing industries in the developed world today. So, while it’s painful and expensive, as it turns out, today’s permanent decisions aren’t so permanent after all.

However, there’s a downside to being able to change our minds and choose, and choose again. While, to their grandparents, a world of infinite possibilities probably seems utopian, for Millennials, endless options can be overwhelming, causing them to obsess over foregone alternatives, or simply to not choose at all. In a study conducted by Elizabeth Dunn, Psychology Professor at the University of British Columbia, participants were asked to pick a piece of art to take home. The individuals who were told that they could later exchange the piece for another were shown to experience less appreciation for their chosen artwork than those who had no such option. So, while we might assume that more choice is better, in reality, being able to constantly change our minds might mean that we are never truly satisfied with any of our choices.

What’s your take on tattoos?

Are you interested in the prevailing cultural trends of our time, and their link to human psychology? Why not consider studying at SACAP? The South African College of Applied Psychology offers an array of courses, such as the Bachelor of Applied Social Science and the Bachelor of Psychology – all of which can serve as the springboard for careers in a wide range of fields. For more information, enquire today.

The Making of the Millennial Entrepreneur

Could you have High-Functioning Depression? Here is how to tell