Five ways for students to get a handle on stress 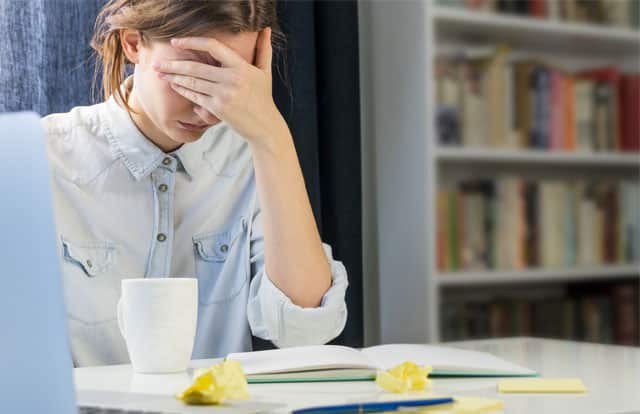 Research indicates that today’s students are more stressed than any of those in generations past.

According to a recent survey, 44% of American university students say they are so overwhelmed with anxiety that it’s almost difficult to function. The data also reveals that many of them use unhealthy coping mechanisms – from overeating to binging on video games – to deal with their stress. And, when it comes to sleep, one in five students don’t get enough.

Sadly, stress levels on South African campuses are no different. The bottom line is that young people are at risk for a variety of unhealthy side effects, including shorter lifespans, due to their high-pressure lifestyles.

If you’re a stressed-out student you’ll know that it’s not as easy as simply breaking up with anxiety. However, sometimes simply rebooting your mindset can make a world of difference. Try repeating these panic-busting refrains when the heat creeps up – they’ll help you keep an eye on the bigger picture and, hopefully, take some of the edge off.

We live in a world of extremes – even the Olympics now includes so-called “extreme sports”. To excel at anything, be it on the playing field, in the classroom and at work, we’re pushed by parents, educators and bosses to become consumed with it. Even hobbies, like video games, become obsessions. This just isn’t healthy. Students need equations that offer benefits and consequences. As an adolescent, your parents may, for instance, have balanced screen time with face time, or time with friends with time with family. And the same applies now that you’re engaged in your post-matric studies. Yes, it’s important to develop your strengths, but moderation is a lost idea that needs to be recovered.

If you’re wilting under pressure you have to find ways in which to reduce the outside stress that is being applied to you. Pushing yourself toward a goal out of a sense of pure obligation – or having others constantly push you – can eventually backfire, with the result that you throw in the towel completely. Instead, you need to remind yourself of your goal’s “pull appeal”: all the compelling reasons you made it a goal in the first place. Perhaps you’re after a career in a field you love so much it won’t even feel like work. Or maybe it’s that six-figure salary you crave, the one that will help you indulge your passion for luxury cars. Whatever the case, you need to clearly define the personal benefits you want to reap from all your hard work so that outward compulsion is replaced by inward motivation. Your anxiety will only lessen when your drive comes from within instead of from outside.

Rather than viewing all your tasks as barriers in the way, enemies to conquer, or stressors to be endured, try seeing them as opportunities to experience. It may seem like semantics, but students often fail to see themselves as capable until an adult comes along and tells them so. You probably remember a teacher or sports coach once saying to you, “You can do this. You’ve got what it takes.” Such words of encouragement would have had empowering effect, stopping you from thinking, “This is too hard for me. I can’t do this. I’m too young.” In the same way you need to remove from the situation your inner critic – the one who repeatedly tries to convince you that what you’re doing is too challenging for your capabilities.

As revealed in the saying, “I used to stress over having no shoes until I met a man who had no feet,” life is a matter of perspective. One of the greatest cures for the common “angst attack” is to consider it in light of the long-term future. Bestselling business journalist Suzy Welch uses the 10-10-10 method for assessing just how important things really are. Will this matter 10 minutes from now? What about in 10 months? And in 10 years? If, say, you feel anxious about getting a bad exam mark, you may find it helpful to remind yourself that a few sub-par performances are going to make very little difference in the grand scheme of things. In fact, sometimes failure is just the wake-up call for improvement you need. As author Cormac McCarthy says, “You never know what worse luck your bad luck has saved you from.” The idea is not only to see the big picture, but also to clearly see the future impact of your daily stressors. The further out you can see into the future, the better your choices will be, and the more stability you’ll have handling the pressures of today.

In a Harvard University study, participants taking a social stress test were instructed to view the stress as something that would actually help them in the test. So, instead of concentrating on the discomfort caused by a racing heart, shorter breath and sweaty palms, they were advised to see these typical stress reactions in a favourable light: the pounding heart as preparing them for action, the faster breathing as sending more oxygen to their brains, and so on. What the researchers observed was that those participants who were able to see their stress as a friend instead of a foe, actually displayed fewer of its typical symptoms. Their blood vessels stayed relaxed and, while their heart rates may have increased, in general they had a far healthier cardiovascular profile than those participants who weren’t able to work with their worry. The takeout: instead of viewing the symptoms of stress as debilitating, try to think of them as performance enhancing; not as signs that your body is getting ready for flight, but rather that it is preparing to fight. Proof, in other words, that it you are equipping yourself with the means to conquer that which is causing your stress in the first place.

What’s your go-to cure for a stressful day?

Are you interested in learning how to overcome stress and turn it to your advantage? You may be well suited to a career in counselling. The South African College of Applied Psychology offers a range of courses, including a BPsych degree, which is accredited by the Health Professions Council of South Africa (HPCSA) and leads to professional registration with the HPCSA as a Registered Counsellor. For more information, enquire today.